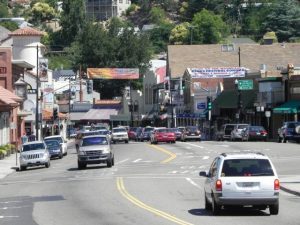 Sonora, CA — Monday’s City Council meeting deferred approving the findings of a Traffic Survey to the Parking and Traffic Safety Committee. The Survey recommended an increase in the posted speed limits in areas of South Washington Street, Lyons Street and Mono Way. The findings will first go to City Engineer Jerry Fuccillo who is in the process of reviewing the survey. No date has been set for his recommendations to be released.

The Tuolumne County Roads Department studied the speeds motorists were traveling on several roads, and most were traveling well above the posted limits.

Lyons Street could see its limit increased to 35 mph, up by 10. Machine counts recorded 4,228 vehicles per day on Lyons Street. A total of 5 collisions were reported in the last 3 years. During off-peak hours pace speeds observed near Old Bald Mountain Road were 28.5 – 38.5 mph.

South Washington Street, between Hospital Road and Highway 108, could be bumped up 5 mph to 40 mph. Machine counts recorded 10,247 vehicles per day on Washington Street. A total of 8 collisions were reported in the last 3 years. Between Highway 108 and Tuolumne Street pace speeds were 31 – 41 mph.

A portion of Mono Way, near the Sanguinetti Loop, could be also increased to 35 mph. Machine counts recorded 22,119 vehicles per day on Lyons Street. A total of 97 collisions were reported in the last 3 years. Based on the reports, no collisions were attributed to roadway conditions or problems with traffic control devices.

During off-peak hours pace speeds observed between Restano Way and Greenley Road were 27 – 37 MPH. Between Greenley Road and Sanguinetti pace speed was 25.5 – 35.5 mph and from Sanguinetti East to Fir Drive the current limit of 30 mph was determined to be adequate.

The survey was done to meet the criteria for setting speed limits set forth in section 2B.13 of California’s Department of Transportation Manual on Uniform Traffic Control Devices. The rule requires speed limits be set at the nearest 5 mph increment of the 85th percentile. The speed limit may be lowered 5mph from this point if certain traffic safety conditions exist as determined be the engineer.