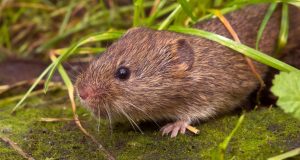 A Vole tunnels under the snow pack in winter, but remain above ground unlike a mole

Sonora, CA — The heavy winter and spring rainfall has boosted vegetation that, in turn, has exploded the rodent populations across the state and right here in the Mother Lode, according to the California Department of Fish and Wildlife (CDFW).

It is a fact that has prompted state wildlife officials to warn against using deadly poisons as they can also kill non-targeted wildlife including children and pets. Birds of prey and snakes do not have a problem keeping up with the hike in native rodents, like voles [pictured in the image box that unlike moles tunnel under the snow pack in winter, but remain above ground], deer mice and squirrels, according to wildlife officials, who recommend these ways instead of poisons to prevent them from taking up residence on your property:

Wildlife officials want the public to realize that when poison is used it can impact the local food chain. They add that other scavenging animals such as turkey vultures, coyotes, foxes, bobcats, bears and even feral cats and dogs can be poisoned by eating a smaller animal that ate rat poison. Testing on mountain lion carcasses collected by the CDFW in 2016-17 showed more than 90% tested positive for poisons and most had been exposed to three or more different kinds.