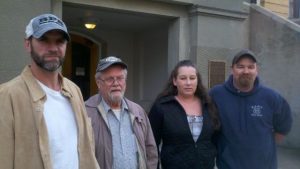 Sonora, CA — A deal was reached yesterday at the trial readiness conference for the four workers of the former Foothill Care Collective.

The marijuana dispensary on Mono Way was one of three that was raided by authorities last May.

Jason Brisco and Rhett Schuller accepted a plea agreement, and charges were dropped against James Brisco and Renee Lyn Rivera. Jason Brisco said he accepted the plea because Judge Eric Dutemple would not allow the state’s Compassionate Care Act and Medical Marijuana Protection Act as a defense. Brisco felt he would loose at the trial without that defense. The plea allowed Brisco and Schuller to keep their right to appeal, which they plan to do.

The sentencing trial will be held on March 26th. Jason Brisco stated that he and Shuller will likely be sentenced to serve time in county jail. Brisco noted his time will be served pending the outcome of the appeal. Brisco is confident he will win the appeal and will not have to serve time but is upset that Schuller may have to serve time immediately after sentencing. The charges are for the illegal transport and sale of marijuana.

Meanwhile, the workers from Today’s Health Collective off Via Este, which was also raided, are still going through the legal process. Another court date has been set in the case against Jana Evans, Nancy Smith, Sara Herrin, and Danny Herrin who have pled not guilty to charges that they illegally sold marijuana. A preliminary hearing yesterday was continued until February 24th.

Judge Eleanor Provost has denied the motion by the defendents attorney to have the case tried before the California Attorney General’s Office.