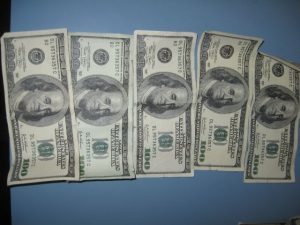 Sonora, CA — Over the past two days, the Sonora Police Department has received five reports of a man attempting to pass counterfeit $100 bills.

Police Chief Mark Stinson says the unidentified man typically purchases items of low value and receives a large amount of change. The PD reports that he appears to have printed the image of a $100 bill over $5 bills.

The Police Department urges business owners to look for the following items when trying to detect a fake bill:

Look for a blue ribbon on the front of the bill. Tilt the note back and forth while focusing on the blue ribbon. You will see the bells change to 100’s as they move. When you tilt the bill back and forth, the bells and 100’s move side to side. If you tilt it side to side they move up and down. The ribbon is woven into the paper and not printed on it.

Look for an image of a color shifting bell, inside the copper-colored inkwell on the front of the new $100 bill. Tilt it to see the bell change from copper to green, an effect which makes the bell seem to disappear within the inkwell.

Anyone with information about the case should contact the Sonora Police Department at 532-8141.