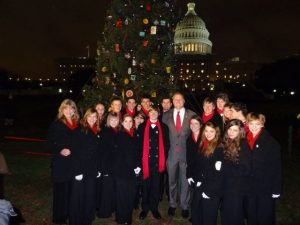 Tuolumne, CA – Congressman Jeff Denham was at Summerville High school to thank the Jazz@8 choir for singing at the U.S. Capitol Christmas Tree lighting. Summerville Principal Dave Urquhart, Vocal music director Madeline Young and 18 students flew to Washington D.C. to perform December 6th. They sang for tourists in the White House, at the tree lighting, and afterwards at a reception for 700 people at the Library of Congress.

Congressman Denham presented the documentation of what was read into the congressional record to Principal Urquhart in commemoration of the trip. The record read in part, “I would like to acknowledge and honor the Summerville High School Jazz @ 8 advanced choir for their exceptional performance at the 2011 capitol Christmas tree lighting ceremony.”

He also said that they were exceptional and “shone a bright light on our community.”

Denham spoke at the Summerville Library with students from the Show Choir, Jazz @ 8 Choir and the Academic Decathlon Team. He answered a variety of questions for an hour.

Regarding the State of the Union Address, Denham said he felt the President’s speech was “pretty congenial.” Denham noted that one of the things they did different this year was not to divide Democrats and Republicans in the seating arrangement. According to Denham they decided ahead of time to “sit with friends” and this allowed them to “mix it up.” He said there was a lot of quiet chatter amongst the two parties.

In regards to the Republican Presidential Primary, Denham says that he sees the spirited debates as a “good thing.” He added that Political Action Committees, that are not directly tied to candidates, are changing the political process by spending large sums on advertising. Denham encouraged the students to be aware of this new trend because it will affect the future of politics.

He was asked his opinion about pulling the troops out of Afganistan. “I think it is a good thing,” he said. “They made good accomplishments while we were there.”

On a lighter note, Denham was asked his favorite song. He gave two. He said in high school he enjoyed “Jack and Diane” by John Mellencamp and “Dust in the Wind” by Kansas. The students agreed to record a version of “Dust in the Wind” and send him a copy.

Denham was asked “Who do you want to win the Super bowl?” He said right now he doesn’t have a stake in the game, and was rooting for the 49ers last week. But he did admit that he would like to see Eli Manning have a good game.

Denham also addressed SOPA, the internet piracy act. He said, “We have to do something.”

He added that he has not endorsed the current legislation being debated in Washington DC. “In creating new laws we have to look at what could happen in the future and dealing with the internet, and there’s a lot of newness to the internet.” Denham stated his worry about other countries stealing intellectual property.

He also stated his concern about the trillion dollar federal deficit. And said, “The way things are going now kids will have less opportunities than we did.” He stated that he wants to get the debt back down, have budgets balance, and focus on the big picture so that, “We don’t go bankrupt.”