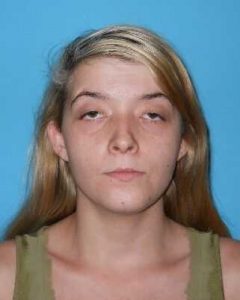 Sonora, CA – An SUV with a door ajar and a dog tied to the handle caught the eye of a passing Tuolumne County Sheriff’s Deputy. It led to one arrest after a dangerous weapon was found inside.

A Ford Expedition was recently parked along Chukar Circle at the Quail Hollow One Apartments in Sonora. A deputy decided to investigate as several blankets were also draped over the vehicle’s windows. A peek inside the SUV uncovered two sleeping adults, who appeared to be living in the vehicle.

During questioning, the pair admitted to having drug paraphernalia on them. A subsequent search of the SUV turned up a large amount of jewelry, a billy club, a smoking pipe with methamphetamine residue, and a stolen credit card.

It was determined that the club belonged to 23-year-old Brooklynn Osborne of Sonora. She was taken into custody without incident for carrying a dangerous weapon. Her bail was set at $20,000.

Sheriff’s officials are trying to determine the rightful owner of the credit card in order to return it to them. The dog was released to the other occupant of the vehicle who was not charged with any crime.