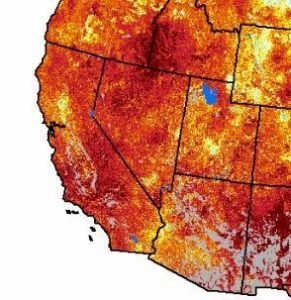 Sonora, CA — A look at rain gauges shows Sonora to be in a moderate drought year. The rainfall year, which begins and ends in July, is about to wrap up. Glen Nunnelley an Associate Engineer for Tuolumne Utilities District keeps track of a local rain gauge in Sonora. He says, including this storm, the amount of rain should be right at 22 inches for the 2012-2013 year. According to Nunnelley the average is 32 inches.

According to National Weather Service Weather Forecaster Johnie Powell the average rainfall in June is .29 inches. Powell reported the record for rain in June was set in 1995 with 1.76 inches.

National Oceanic and Atmospheric Administration (NOAA) has designated much of California to be experiencing a moderate drought year. An animation of the Vegetation Drought Response Index shows very dry vegetation across the Western United States. Detailed visual information for several past years is here.

The NOAA official 3 month forecast for July to September calls for slightly above average temperatures in most of California with an equal chance for above and below average precipitation. The outlook for half of Texas, Oregon, Washington and Idaho is below average precipitation with the area from Florida to Kentucky receiving above average rain. Click here for maps.

An earlier news story about a snowfall study is here.