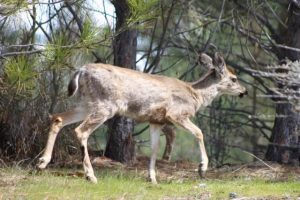 The California Department of Fish and Wildlife is studying a “deer hair loss syndrome,” with a special focus on Tuolumne County.

State officials are concerned that several deer across California have lost much of their hair, and the culprit is believed to be the infestation of “non-native lice.” The DWR became aware of the situation in 2009 when a nearly hairless deer was found dead just outside of Groveland.

Over the next five months, officials found nearly 250 dead and balding deer in areas along the Sierra Nevada. The hardest hit area has been Tuolumne County, but the problem has been documented in 15 California counties, as far down as San Diego.

To date, the DWR reports that researchers have collected hair and blood samples from over 600 deer and elk across California. They are counting and identifying lice on the deer, applying radio collars to track the deer, and treating many of those impacted. The symptoms range from a scruffy looking coat to complete baldness. The DWR reports that the infested deer spend so much time trying to groom and scratch themselves, that they become an easy target for prey, such as coyotes and mountain lions. It is resulting in several fawn being unable to live their expected range of life.

The CDFW reports that the purpose of the research is to understand why the lice infestations are occurring, and understand the full impacts of non-native lice species and hair loss.

There are different theories being tossed around at this time. “It has been speculated that this condition may be attributed to an environmental deficiency of copper or selenium, or some other underlying environmental factor such as a difficult to detect disease agent,” says Pam Swift, CDFW state veterinarian. “Regardless, we are conducting a comprehensive coordinated effort that will hopefully shed some light on this perplexing syndrome and minimize its effect on California’s precious deer population.”

The non-native lice do not prey on humans.