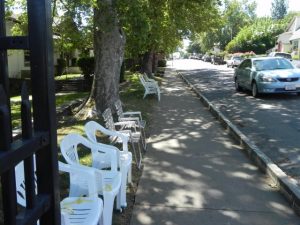 Sonora, CA — Some of them even set out their chairs early as yesterday morning just to get a good spots to watch the floats go by for the Mother Lode Round-up parade. Thousands will be cramming into downtown Sonora this morning for the popular Parade which starts at 10a.m.


Round-up Chairman Jim Earl says there will be plenty of floats and horses vying for the top prize, “Our two biggest prizes are the Tuolumne Cup which is the overall best non-equestrian entry or float. The other one is the Mother Lode Sweepstakes and that is the best equestrian entry. We usually get over 200 entries all competing for top honors.”

The party doesn’t stop when the parade ends. Parade goers can mosey on over to the Rodeo which starts at 2p.m. in the Mother Lode Fairgrounds.

After that you can dance the night away to the tunes of the Chris Gardner Band at the Round-Up Rodeo Dance starting at 8p.m. Click here for a complete list of this weekend’s Round-up events.