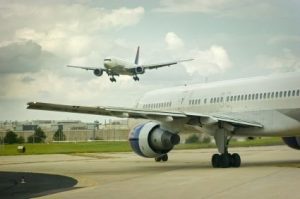 Sonora author and historian Janet Irene Atkinson has published a very personal book that chronicles the life and career of her late daughter Sari March Schnepf-Terry.

Atkinson was Thursday’s KVML “Newsmaker of the Day”.

Schnepf-Terry was a daughter who expressed her love for airplanes, drawing her first airplane at the age of three, proclaiming that she wanted to be a pilot in her early teens and was flying solo by the age of sixteen.

Amazingly and unbeknownst to Atkinson, Schnepf-Terry was also writing daily journals of her life beginning at the age of fourteen.

Her daily journal entries expressed her strong desire and goal to become an airline pilot and she documented that international and adventurous journey.

The detailed journals document her loves, her battle with weight, sexism and her airline career through 1987. At that point, she began keeping her journals on a computer but sadly, those documents are gone and no longer exist.

PSA merged with USAir and Schnepf-Terry remained with the airline until 1993.

It was in 1993 that she was diagnosed with Lupus. Lupus took the life of Schnepf-Terry in 2002.

Atkinson fills in the remains years after 1987 as best as she knows and can recall.

With this very personal and close-to-home book, Atkinson hopes that women will learn and be inspired by her daughter’s story, the personal struggles with weight issues and the pressures women face in a career that is still dominated by men. Ultimately Atkinson hopes that “Wings Of Eagles” inspires females to set out and achieve their own goals.

“Wings of Eagles” is available at Mountain Bookshop in Sonora, Charlie’s Books in Jamestown and on Amazon.com.

Atkinson will be a guest speaker at the Tuolumne County Library on Greenly Road on Thursday, May 2nd and she will be sharing historical stories and tales, as found in a number of her books about many of the characters who have resided in the Mother Lode at one time or another.