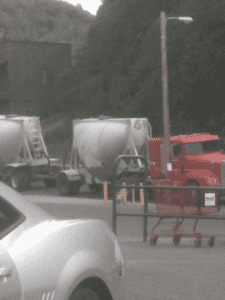 Sonora, CA – The CHP reports tips helped them to recover a stolen truck and two trailers taken from a parking area in Sonora. The Red 1991 Freightliner semi and the two attached trailers were parked in a dirt lot on Jamestown Road and Racetrack Road at around 8p.m. Thursday night. When the owner returned Friday morning around 9a.m. they were gone. He immediately reported them stolen to the Sonora CHP. On Saturday, San Andreas CHP got a phone tip.


Officer Jaime Castillo says, “The big-rig was located off of Sheep Ranch Road and Fullen Road near Murphys. The reporting party said there was a truck and it had been there for about three days and it looked vandalized.”

When a deputy arrived at the scene they found the stolen truck with the hood left open. Two batteries and some tools were taken. Also, the two trailers were missing. The CHP called in a helicopter to fly over the remote area, but the trailers were not found. Castillo says on Sunday they got another call from a truck yard in Vallecito. That morning a worker found the two trailers parked in the yard.

Truck and Trailer Owner Stephanie Garcia says, “One of the workers at the yard recognized the trailers from the pictures on myMotherLode.com this past Saturday. It was awesome. We were surprised, shocked and glad, everything at the same time. It had been a rough weekend. We’re back on the road and we’re glad.”

Click here for a map of where the truck was found.