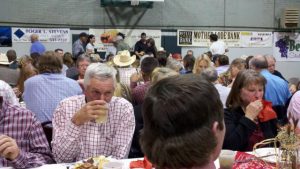 Tuolumne, CA — Organizers call the 24th annual TuCARE Dinner and Auction a success with the highest turn out ever. They say 420 tickets were sold to the event and there wasn’t an empty seat at Tuolumne Veterans Memorial Hall in Tuolumne City Saturday night.

“On average for the evening we usually bring in $19,000 and that’s before expenses. Black cost us more than usual speaker fees and so we probably will make close to the same amount as we have in the past for the Tour For Kids Program even though we did have a bigger attendance this year.”

Fleming also says sponsor numbers were down this year. Proceeds from the event will benefit TuCare’s programs including “Tours For Kids”. Those are educational programs for school children, which at times, includes hands-on field trips.