‘The Sky’s The Limit’ For Wildcat Austin Patterson 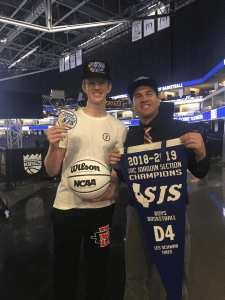 Junior Austin Patterson led a talented Wildcats team to 27-5 season and a post-season that included a Sac-Joaquin Section Championship clincher at Golden One Center in Sacramento and the opportunity for Sonora High to host a state final at home.

In fact after recently winning a regional Sacramento television station-sponsored Athlete of the Week competition, he is currently up against two other student-athletes for its Athlete of the Month honors. (Voting begins tonight at 10 and is open through Tuesday, March 26. For more details, click here.)

Powering On Through Post-season

“When we got into league-play, he just kept it going…he was selected as the Mother Lode League’s Most Outstanding Player…in the post-season I was real worried that he might be getting fatigued, but he had just an amazing post-season, specifically making, big, big shots,” Longeway continues.

“Even in our final game versus Palo Alto, he had 20 points in the first half and finished with 32…in our Section Championship game, he hit the game-winning three-pointer with less than a minute left — and had 27 or 29 points in that game…an amazing year for a junior.”

The coach jokingly refers to Patterson as his Silent Assassin. “A lot of teams look at him and think he’s just a skinny red-headed kid — but once the game starts he’s a handful and really hard to stop,” he laughs. “He just a nice kid off the court…doesn’t have a huge ego and treats his teammates and me the right way with a lot of respect, and I think that’s notable.”

Cackling delightedly about having Patterson back next season, Longeway says the most exciting part of Patterson’s journey lies in Division 1 play. “The thing about Austin is that I really felt like he was the best player on the court every single game that we played this year —  and we played some really good teams — so that is really something to be said for him. He is well-respected by his teammates…making good basketball decisions…some of his biggest plays in our Section Final [win] at Golden One were some of the assists that he had.”

Longeway predicts this summer will be significant for Patterson, who is playing on a high-power travel team sponsored by Under Armour called the West Coast Elite. “He’s just going to get stronger, and faster and bigger. It’s really exciting and the sky is really the limit for his future and I am going to be excited what team ends up picking him up,” he confides enthusiastically. “He really has high goals…he’d love to play in the West Coast Conference or Mountain West Conference, and the word’s getting out.”

While a couple of Division 2 schools have already offered him scholarships, Longeway shares that some D1schools are following Patterson’s progress.  “This travel season is going to be huge for him…he’s going to find out exactly what schools are interested in him…D1 college coaches turn up to check out the elite teams and players over the summer.”

Recalling over 15 years at Sonora High and playing before that, Coach Longeway says he has never before seen the likes of Patterson’s promising talents. “In offensive talent, it’s probably the best I have ever seen…he has his finishing ability, mixed with his speed and athleticism, he’s on a whole other level.”

While no player from Sonora has yet to make it to the NBA, Longeway recalls two D1 players in recent memory: Bill Walton, who attended University of the Pacific on a full-ride scholarship in the 1990s; and Brendan Evans, who in the 2000s attended Utah Valley State.