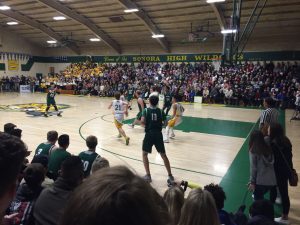 Sonora, CA — It was a tough night, but an end to a very successful season, for the Sonora High boys basketball team, as the Wildcats fell to Palo Alto, 68-62, in the opening round of the CIF Division III state basketball playoffs.

A strong crowd was on hand at Sonora High School Tuesday evening. Sonora High’s Austin Patterson scored 32 points for the Wildcats, including six three pointers. The Wildcats, who last week clinched the CIF Sac Joaquin Division IV championship with a 73-70 win over Liberty Ranch, ended the year with a 27-5 record.  Palo Alto now moves on to face Stuart Hall High School on Thursday in the second round of the playoffs.