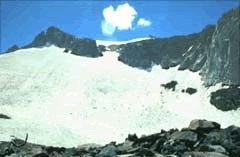 Yosemite, CA — What has long been considered the largest glacier in Yosemite National Park, is technically no longer a glacier, according to geologists.

That’s according to a study conducted by the National Park Service and University of Colorado. The group has been monitoring movement of the Lyell Glacier for the past four years by placing stakes in the ice and tracking their positions. Data collected indicates that no movement has occurred within the past several years. Earlier research on the glacier showed that it was noticeably moving in the 1930’s, so stagnation occurred since that time.

“The Lyell Glacier has historically been recognized as the largest glacier in Yosemite National Park and the second largest in the Sierra Nevada,” says Greg Stock, a geologist with Yosemite National Park who co-led the study. “However, the lack of movement suggests that the term ‘glacier’ no longer accurately describes this feature.”

The Lyell Glacier has decreased in size by 60% since 1900, and has thinned by approximately 120 vertical ft. The group believes that this is most likely the reason why the glacier has stopped moving.

The group also studied the Maclure Glacier, which is adjacent to the Lyell Glacier, and found a much different result. Despite having a very similar amount of ice loss, the Maclure Glacier is moving by about an inch per day. Officials report that much of the downhill movement occurs by water slowly sliding at the glacier bed due to the “increased amounts of melt water.”

The group says the study built on historic research on the two glaciers conducted by Conservationist John Muir. The scientists concluded that it adds to the growing evidence of ice loss worldwide, and illustrates, “the complexity of the landscapes response to climate change.”

It is noted that the study was funded by the non-profit Yosemite Conservancy.