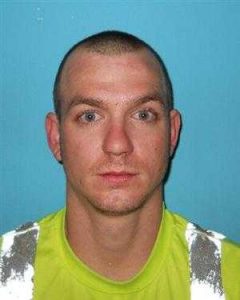 Jamestown, CA – During a heated exchange between a Twain Harte man and another person, a weapon was drawn and used to damage a pickup, landing one person behind bars.

A verbal argument broke out just before midnight on Wednesday and awoke neighbors who reported the disturbance to Tuolumne County Sheriff’s Dispatch. When deputies arrived at the Kanaka Point Drive location in the Jamestown area, off Jacksonville Road, they found a Dodge Ram truck with a broken window.

During questioning, the victim reported that 27-year-old James Cooper threw a pocket knife at the window causing it to shatter. What sparked the argument and how the pair knew each other is not clear. Cooper had fled the scene prior to the deputies’ arrival.

Cooper was contacted by investigators regarding the fight and damaged truck. A short while later he turned himself in at the sheriff’s office lobby located at 228 Lower Sunset Drive in Sonora. He was taken into custody for felony vandalism. His bail was set at $15,000.