Reflections On The Passing Of Huell Howser 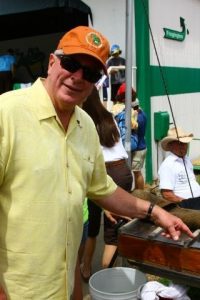 Upon learning of the Howser’s death, Sikes immediately issued this statement on behalf of the Visitors Bureau:

“RIP Huell Howser. Thank you for the larger than life impact you had on the California travel industry including your great support of Tuolumne County through the years.”

For years, “California’s Gold” took viewers to many parts of the Golden State, with Howser doing folksy, highly enthusiastic interviews and narration in a distinctive twang he brought with him from his native Tennessee.

Howser’s friendly interview format was characterized by a gentle inquisitiveness and a love for little stories punctuated by his hallmark exclamations of “That’s amazing!” or “Look at this!”

According to Sikes, Howser loved the Mother Lode area and recently featured a one hour show, focusing just on Jamestown and Railtown 1897 State Park.

Over the past decade, Howser featured Groveland, Columbia, Jackass Hill, J-59 highway, Yosemite National Park, Sonora and several locations in nearby Calaveras County (including showcasing the 2010 jumping frog competition at the Frogtown fairgrounds).

With little more than a cameraman trailing him, Howser’s programs didn’t have slick production values but drew viewers in with his intimate, conversational interviews.

“I want our stories to reveal the wonders of the human spirit and the richness of life in California, including its history, people, culture and natural wonders,” he wrote.

Sikes said, “His reruns will air for a long time and I hope that PBS will find a way to continue to showcase our state. However, nobody will ever be able to replicate Huell Howser.”

In mourning the loss, Los Angeles City Councilmember Tom LaBonge, who was sworn into office by Howser, his friend of 30 years, said no one will ever be able to replicate his enthusiasm.