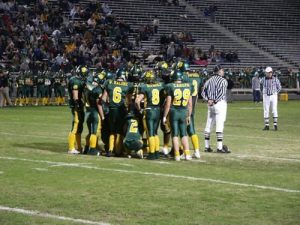 Sonora, CA – Sonora High’s athletic department was blown away by a gift from a local casino that will have the Varsity and JV teams hitting the field with brand spanking new uniforms.

As the school’s athletic director Karen Sells tells it, the coaching staff reached out to the Chicken Ranch Rancheria of Mi-Wuk Indians to see if they would like to pitch in to which their council asked, “How much do you need?” Replying that the total cost for the new uniforms would be $26,000, what happened next, shocked Sells, who says the council offered to foot the bill. As she recounts, “My jaw just dropped because I had no idea that big of a donation would be coming, we had talked about there being some, but I had no idea that it would cover the entire cost of uniforms for both teams – It’s a huge deal…that can’t be understated for how important it is and to recognize the Chicken Ranch Casino for what they did for us.”

Sells says the school board approved the donation earlier this week and they have the money in hand. The next step is to get the requested sample Under Armour uniform in the mail, which is anticipated sometime next week. Sells details typically the varsity team passes down its old uniforms to the JV team, but this time the freshman team will get their uniforms, which Sells says have been around for over five years. “We haven’t had a donation of this magnitude, maybe ever, for one of our athletic programs. I really, really appreciated that because it really changes the dynamic significantly. Raising $26,000 is not an easy task – I definitely appreciate them.”

While Sells does not have any pictures of the sample uniform to share, she says players will give their feedback once they arrive and then a final uniform will be picked. She is expecting the teams to suit up in the new gear next year.