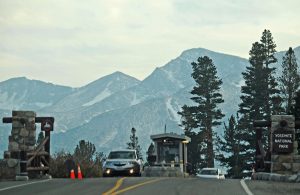 Sonora, CA — Mother Lode Congressman Tom McClintock is requesting that an emergency exception be enacted to allow for maintenance of national parks during the partial government shutdown.

In a letter sent to Acting Secretary of the Interior David Bernhardt on Friday, McClintock urged him to implement an emergency exception outlined in the “Antideficiency Act.” While praising the Yosemite National Park concessionaire for not only footing the bill, but also picking up the garbage and maintaining the restroom due to the lack of federal staffing, McClintock notes that the exception would allow for funding to the National Park Service to take over those duties once again due to “a clear risk to public health and safety and to protect federal property.” Citing reports outside Yosemite Valley of irresponsible individuals creating “piles of trash and even human waste,” McClintock went on to urgently request Bernhardt to invoke the act exception immediately “so that the public can continue to exercise its right to access the public lands safely until appropriations can be made.”

Of note, as earlier reported here, Tuolumne County Visitors Bureau volunteers began handing out trash bags to Yosemite visitors today at the Big Oak Flat/Highway 120 entrance and some gateway community businesses have open their garbage bins to allow visitors to dump their trash when leaving the park.

Acting Secretary of the Interior

U.S. Department of the Interior

I want to thank you for the diligent efforts that the administration has made to keep our national parks open to the public during the current government shutdown.

This has been particularly important to visitors to Yosemite National Park and its gateway communities.   Our concessionaire at Yosemite is Aramark, which has maintained the restrooms and garbage collection in the valley during the current shutdown at its own expense.  Outside the valley, however, there are increasingly dire reports of irresponsible individuals who are producing uncollected buildups of garbage and even human waste.

This has also been true at Sequoia and Kings Canyon National Parks, where the Delaware North Corporation has provided clean up at their facilities while conditions have deteriorated outside their jurisdiction.  Park rangers at some sites believe this poses such a threat to public safety that they are closing portions of the public lands throughout the National Park System.

The Antideficiency Act, which generally prohibits agencies from continued operation in the absence of appropriations, makes an exception for “emergencies involving the safety of human life or the protection of property.”

I believe these developments present a clear risk to public health and safety and to federal property.  Accordingly, the collection of garbage and the servicing of restrooms certainly falls within the actions the Park Service can take during the current lapse of appropriations.

I would therefore urgently request that you invoke this exception to the Antideficiency Act immediately so that the public can continue to exercise its right to access the public lands safely until appropriations can be made.