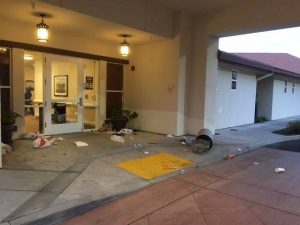 Sonora, CA – There was a scare at a Sonora nursing home this week after a man randomly attacked a wheelchair bound resident in the facility.

When staff tried to intervene and pull Hernandez off the victim, he started hitting and kicking them. An employee called 911, but not before Hernandez began punching a glass entrance door to the facility. He then picked up several chairs and tossed them at the doorway eventually causing the pane to shatter. The picture in the image box shows the broken door along with other items; including a garbage can that Hernandez overturned and strewn litter across the entryway.

When Tuolumne County Sheriff’s Deputies arrived on the scene, Hernandez was still in the vicinity of the facility. After questioning, he was arrested and booked into the Tuolumne County Jail for vandalism, battery, burglary and elder abuse.