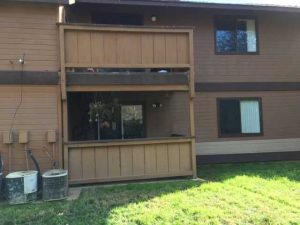 Sonora, CA — The alert resident called 911 after witnessing a man breaking into a Sonora apartment and then throwing items from its balcony.

A report of a burglary in progress at Quail Hollow One Apartments on Chukar Circle in Sonora Thursday morning brought Tuolumne County Sheriff’s Deputies to the scene to investigate. Immediately they spotted 37-year-old Sean Evans, who fit the description of the reported suspect, at a nearby unit. When Evans saw the deputies he took off running, but was quickly captured. He was searched and deputies found methamphetamine hidden in his clothing. Evans was arrested for burglary, receiving stolen property, possessing drugs and resisting arrest.

Deputies also searched the apartment that Evans ran from and discovered a backpack that he had thrown from the balcony. Inside they found stolen jewelry, cash and clothing. In the unit that was occupied by 41-year-old Daniel Oliver and 30-year-old James Tracy Jr., deputies also uncovered heroin, methamphetamine and drug paraphernalia. Both were arrested on several drug related charges including maintaining a drug house. While being booked into the Tuolumne County Jail, a search of Tracy Jr. netted more drugs and additional drug charges.

Just this Tuesday Clarke Broadcasting reported that Evans was arrested over the holidays for breaking into a detached garage at a Jamestown home; further details can be viewed here.