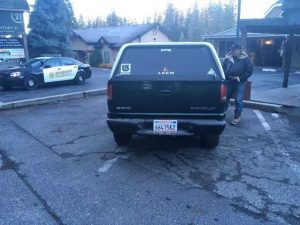 Tuolumne County, CA — The Christmas spirit appeared to be lost on two individuals taken into custody over the holiday weekend — one used a hammer to try to settle a dispute.

A domestic disturbance call brought Tuolumne County Sheriff’s Deputies out to a home in Twain Harte the Saturday before Christmas. Once on scene, the victim told them that 40-year-old Rachel Jack of Modesto had physically attacked him and also used a hammer to strike his pickup several times. Jack was located a short while later at a cabin on Italian Bar Road in Columbia. After questioning, she was arrested her for domestic violence and vandalism. Her bail was set at $15,000.

On Christmas morning, deputies responded to a home on Los Nogales Road in La Grange for a disturbance.  The homeowner called 911 and reported that her home was being vandalized. Deputies found 29-year-old Kyle Hoover exiting the home and detained him.

Further investigation revealed that Hoover had damaged several items in the home including a computer, an interior wall, furniture and dishes. He was arrested for vandalism and violating his probation.