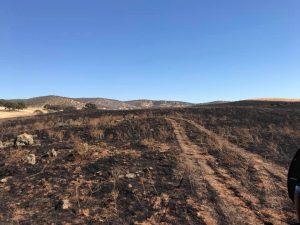 Tuolumne County, CA — Officials have determined what ignited a 27-acre fire off Highway 108 near Tulloch Road.

While very limited details have been released, CAL Fire reports that it was caused by someone who was doing some shooting with a gun. The fire ignited during the noon hour yesterday and it was fully contained during the three o’clock hour. The fire’s name was in reference to its close location to Wildcat Creek.

CAL officials report that yesterday’s incident proves that there remains a high risk for wildfires in the region, and October has traditionally been one of the more historically challenging months for firefighters. While the temperatures are cooling, the winds often pick up this time of year, and there has been only minimal rainfall on the very dry vegetation. Higher winds and low humidity are projected across California over the next several days.