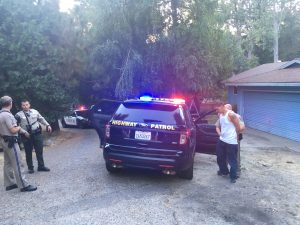 Crystal Falls, CA — The CHP has released identity of a Sonora man who was arrested after he led officers on a chase that ended in a short standoff in Crystal Falls last night.

The suspect was identified as 39-year-old Tom Knolls. As reported here, Knolls was arrested at his home in the 22100 block of Crystal Falls Drive when he ran inside the house to elude law enforcement that used their patrol cars to surround the house. The incident began around 5:30 p.m. Thursday night. CHP spokesperson Sgt. Dave Chesson relays what led up to the chase. “Sonora CHP had received numerous complaints from the neighborhoods in lower Crystal Falls about a motorcycle that had been driving erratically and at high speeds with a loud exhaust system for the last couple of weeks. We sent officers in that area numerous times trying to locate the responsible party.” He continues that an officer patrolling the neighborhood last night spotted the suspect.  Sgt. Chesson details, “Knolls was riding an off-highway motorcycle at a high rate of speed when the officer attempted to make a traffic stop and a short quarter mile pursuit ensued.”

Knolls ditched the bike at his home and ran inside, which is when the short standoff took place. Officers used a bull horn to order him out of the residence. About 15 minutes later he emerged from the home and was arrested.