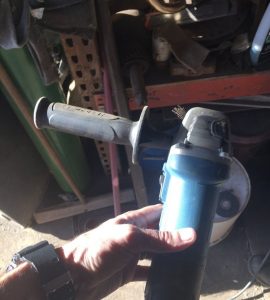 Update at 6:40pm: CAL Fire reports that the Ham Fire was caused by someone using grinding equipment. Officials remind that it is important to have proper clearance, tools and water supplies when working in dry fuels. The person responsible has received a citation.

Original story posted at 6:09pm: San Andreas, CA — Forward rate of progress of a vegetation fire that ignited off Highway 12 just west of Highway 49 has been quickly stopped.

According to CAL Fire, which is working with San Andreas fire district responders, the incident, dubbed the Ham Fire, is estimated between two and three acres and is not threatening any structures.

Officials add that quickly arriving air and ground units arriving immediately attacked the flames, which broke out on the north side of Highway 12 near the junction of the two highways.