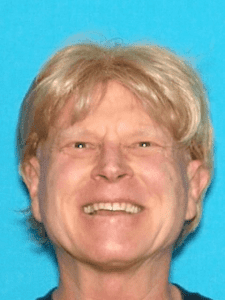 San Andreas, CA — A Silver Alert has been issued by the Calaveras County Sheriff’s Office with the hope of it helping find a veteran with medical disabilities who went missing two days ago.

Sheriff’s officials say that 65-year-old Shannon David Scott of Wilseyville, who was last seen at his home near the 4000 block of Blagen Boulevard, left for a VA appointment in Rancho Cordova on Wednesday at 11 a.m. but never arrived. His vehicle is a white 2014 Fiat with California Purple Heart license plate #9038PH. It bears a large Marine Corps sticker on the rear window.

Scott is described as a white male, six feet tall and 170 pounds with short blonde hair and blue eyes. He is dependent on a wheelchair and was last seen wearing a black shirt, white shorts and brown shoes. To view an enlarged image of him and a photo of a similar vehicle, click into the image box slideshow.

Anybody with information on his whereabouts should immediately contact the Calaveras County Sheriff’s Office at 209 754-6500.