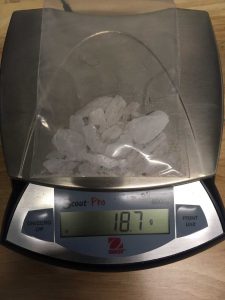 Meth found during the bust

Sonora, CA – A request by a parole officer uncovered a parolee’s new crimes sending him back to jail.

Not knowing the whereabouts of parolee, 27-year-old Zakary Howerton, his parole officer asked the Tuolumne County Sheriff’s Narcotics Detectives to locate him. Howerton was spotted on Barretta Street in Sonora by detectives Wednesday afternoon.

A search of his belongings turned up nearly 19 grams of methamphetamine, as pictured in the image box, which is a violation of his early release from incarceration. Howerton was taken into custody. He was booked back into the Tuolumne County Jail for possession of a controlled substance for sale and violation of parole, for which he was given a no bail designation.

As reported here, in June Howerton was also put in handcuffs after fleeing from a deputy during questioning regarding a warrant. He was caught with burglary tools a gas siphoning pump in his backpack. The warrant for his arrested related to felony theft and giving a false identification.