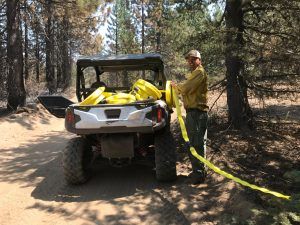 Tuolumne County, CA — Those battling the Donnell Fire will primarily focus on the northeastern edge today as the blaze continues to move along the Highlands, Arnot and Disaster creek drainages. More details in a timeline about the Donnell Fire is here.

Crews are being relocated to this region as other areas gain containment. The southern portion of the fire is primarily in the mop-up stage. The main base camp was recently moved from Dodge Ridge to Bear Valley. The Forest Service’s current strategy is being described as “hold, validate and mitigate.” Crews are working hard to hold fire lines that are already constructed around the perimeter, look for areas to build new direct lines to stop any new growth, and mitigate hazards for firefighters.

There are 714 firefighters assigned to the incident, 13 hand crews, nine helicopters, 22 engines and five water tenders. The fire is 36,318 acres and there is 63-percent containment. Highway 108 remains open through the fire area, but travelers are not allowed to stop on the road. You can however stop and recreate at Kennedy Meadows.