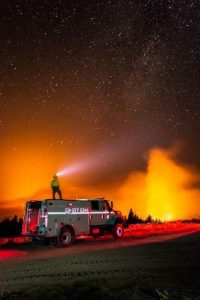 Tuolumne County, CA — The Donnell Fire in the Stanislaus National Forest saw some slight growth overnight and is 31,369 acres and 36-percent contained. An overview of Donnell Fire news stories is here.

865 firefighters are on scene this morning, and the resources include 18 hand crews, five helicopters, 39 engines, two dozers and eight water tenders. The fire has been burning the hottest over recent days north of Spicer Reservoir. Today, more crews, and aircraft, will work to build and strengthen lines in that area. There is also still some more minor fire activity north of Highway 108 and Kennedy Meadows in steep and rugged terrain. Teams are also currently working to complete the last short segment of containment line south of Highway 108 between Douglas Picnic area and Bennett Juniper.

The inversion layer is expected to lift by late morning which will likely increase fire activity. Winds this afternoon could reach around 20 mph. Firefighters are bracing for even warmer temperatures this weekend.

Also of note, today marks the five year anniversary of the Rim Fire that burned 257,314 acres in the Stanislaus National Forest. It was the fifth largest fire in the state’s recorded history and the largest ever in the Sierra Nevada. To read a recap of the Rim Fire, click here.