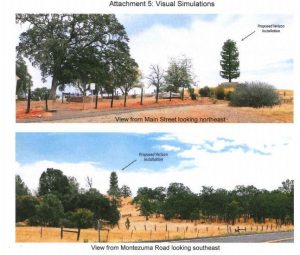 Sonora, CA — The Tuolumne County Planning Commission wants to hear from the public on three projects including cell towers camouflaged as pine trees and a property zoning change for an outdoor camp.

Regarding the two wireless cell towers, one is proposed in the Chinese Camp area and the other in the Groveland area. The latter would be located at 10470 Shawmut Road between Highway 49/120 and the Don Pedro Reservoir. Peek Site-Com, Inc. is asking for a Conditional Use Permit to construct a tower that would be a 102± plus foot stealth broadleaf wireless cell tower with a 5± foot branch crown. It would house up to 12 antennas and remote Radio Units making the total height around 107± feet.  There would also be cabinets and fencing around the facility.

The other tower proposed by AT&T for Epic Wireless would be constructed at 22560 Ferretti Road near Clement Road in the Groveland area. It would be a 103± foot stealth monopine wireless with a 7± foot branch crown. There would be 12 antennas and nine remote radio units for a final height of 110± feet. This facility would also accommodate up to two additional wireless service providers, up to 12 radio units, 2 microwave dishes, and up to 36 antennas. There would also be an outdoor equipment shelter, a 35kw emergency standby propane generator all within a fenced compound.

Additionally in Groveland, the Tawonga Jewish Community Corporation that operates Camp Towanga on a 160± acre site on 31201 A Mather Road has applied for a zone swap. It would rezone 16.2± acres from general recreation to open space and 9.8± acres from open space to general recreation. The group has a multi-phased master plan to upgrade the camp for longer season and generate a 12 percent increase in capacity during the summer season.

Both towers would bridge a significant communication coverage gap in both Chinese Camp and Groveland, according to county staff, that recommends approval of the towers and property zone change for the camp.

Tonight’s meeting begins at 6 p.m. in the Board of Supervisors Chambers on the 4th floor of the county administration center on 2 South Green Street in Sonora.