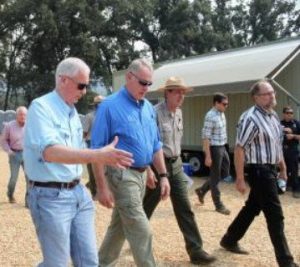 Zinke was Wednesday’s KVML “Newsmaker of the Day”.

Before arriving in California, Zinke was in Colorado at the Steamboat Institute Freedom Conference, where he addressed the numerous wildfires burning in the western half of the United States.

Zinke and Burman toured the Whiskeytown National Recreation Area, which is jointly owned by the National Park Service and USBR. Much of Whiskeytown was severely damaged, however maintenance crews are working to restore power and sewage to the site for people to again access the lake.

Secretary Zinke also went to a small community west of Redding where several DOI employees lost their homes. The Secretary drove and walked the neighborhood, stopping to talk with families.

On Monday, Secretary Zinke was joined by United States Department of Agriculture Secretary Sonny Perdue for a series of briefings and meetings with local officials and firefighters.