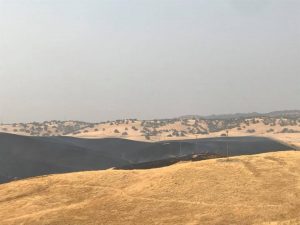 “They are making really good headway,” she comments, adding that updated figures should be available later tonight. At last report, the blaze was estimated a quarter contained at 290 acres.

Update at 5:33pm: A fire burning in rolling hills and grass below Rancho Calaveras dubbed the South Fire is now reported at 290 acres in size and 25 percent contained.

Update at 4:37pm: Air and ground resources continue to respond to fight a vegetation fire below Rancho Calaveras located near Milton and South Gulch roads.

According to CAL Fire spokesperson Emily Kilgore, it was initially reported at 50 acres early in the four o’clock hour and the flames are moving at what she describes as a dangerous rtae of spread. The CHP is planning to close Hunt Road at Milton Road. Kilgore says to avoid Hunt, Milton and South Gulch roads due to a high volume of fire response traffic.

Original Post at 4:18pm: San Andreas, CA — Air and ground resources are fighting a vegetation fire below Rancho Calaveras that broke out late in the 3 o’clock hour.

The location is being described as Milton Road at South Gulch Road. According to CAL Fire spokesperson Emily Kilgore, who is heading out to the incident, the size is 50 acres and the flames are moving at a dangerous rate of spread.

However she adds that no structures are under threat at this time. We will keep you posted as more information comes into the news center.