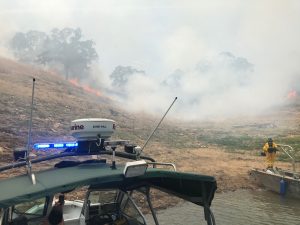 Update at 9:17pm: The final size estimate of the Blue Fire near Lake Don Pedro is 4.8 acres. CAL Fire reports that it was caused by an escaped campfire.

The Tuolumne County Sheriff’s Office reports that areas of the campground were evacuated due to the fire. Thankfully fire crews quickly gained containment of the blaze. Crews will remain on scene this afternoon mopping up the incident. It is not immediately clear what caused the fire.

Be prepared for activity in the area.

Click on the video box to view an air tanker helping to fight the blaze.