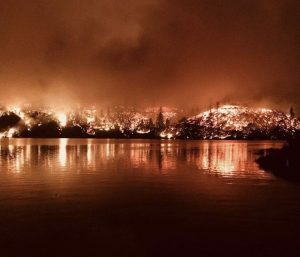 Two of the deaths are firefighters and three are civilians. Officials report that Redding Fire Department Inspector Jeremy Stoke and privately hired bulldozer operator Don Ray Smith have been killed. In addition, the Associated Press reports that two unidentified children and their great-grandmother died after they could not escape the fire’s path.

The Carr Fire in Shasta County is over 80,000 acres and there is only five percent containment. Governor Jerry Brown earlier this week issued a state of emergency declaration and this afternoon President Donald Trump signed a federal declaration. Around 500 structures have been destroyed and an additional 5,000 are threatened. The fire was ignited on Monday by a car experiencing a mechanical issue.