5 Big Events This Weekend In The Mother Lode 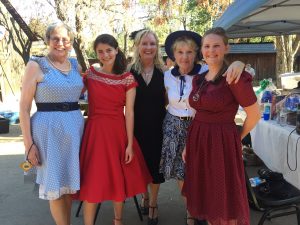 With July starting on a Sunday the 14th is finally the second Saturday with Downtown Sonora’s monthly event starting at 5pm. Linoberg Street will feature artists doing demonstrations and crafts, plus many of the galleries, restaurants, and shops will feature art, live music, and performers. The Red Church and the Veterans museum will be open for tours and the Sonora Writers Group will be setting up a table in the Baer’s alcove to
promote the large number of books that have been written in the county. Event organizers encourage visitors to “put a few extra bucks in your pocket for the musicians tip jars.”

At Coffill Park beginning at 8pm the band “Threshold Rocks” will play dancing music from Chicago to Tower of Power, Motown to Huey Lewis, Funk to Classic Rock. There is a no-host bar, and this year everyone is welcome and all the Coffill Park Summer Concerts are free.

Friends of Columbia State Historic Park will celebrate Columbia’s 73nd year as a California State Park by hosting the 23th annual Big Band Street Dance event on Main Street in Columbia on Saturday from 6:00 pm until 10:00 pm. Admission is free and 1940’s costumes are encouraged. A free tour of the town with a park aide begins at 11am.

Although admission is free, donations to Friends of Columbia to support educational and historical programs are greatly appreciated. For details on the bands that will be playing and what to bring, view the community event calendar listing here.

Plays: The Foreigner opens Friday night at Murphys Creek Theatre. The play is a comedy about a shy man named Charlie who overhears a lot of interesting things while staying at a fishing lodge. The play is by Larry Shue and it is directed by Maryann Curmi. At Sierra Repertory Theater’s East Sonora Theater Pageant: Musical Theatre opens on Friday as well. The play features six beauty contestants battle for the title of “Miss Glamoresse” with the added twist; the contestants are all played by men. The show is rated PG-13. At Sierra Repertory Theater’s Fallon House Theatre in Columbia Disney’s Beauty And The Beast: Musical Theatre is playing.

As heard on KVML “Newsmaker of the Day” interview with Northern California resident Greg Kihn; Black Oak Casino’s Westside Pavilion Concert on Sunday in Tuolumne will feature the Best of Show by Rick Springfield. Kihn will be performing with the bassist and drummer from Sammy Hagar’s Cabo Wabo band and his son Ry. Other performers include Loverboy and Tommy Tutone. Gates and box office open at 5 PM, entertainment will start at 6 PM.

Also on Sunday, in Columbia, a Community Yard sale will provide money for “Grace Strong” with proceeds going the family of Grace Whited, a 3 year old stricken with stage 4 cancer. The yard sale’s location is in the event listing here.