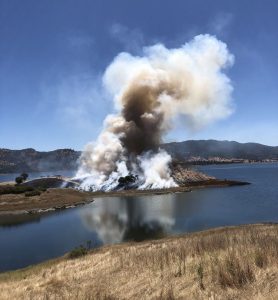 We reported last week that CAL Fire was planning a prescribed burn ahead of the annual fireworks show scheduled at the site next month. The burn was weather permitting, and as you can see in the image, everything moved forward as planned. The burn is expected to be wrapped up early this afternoon, according to CAL Fire, and officials will then remain on scene mopping up any hot spots.