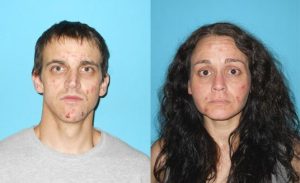 Sonora, CA —  Following the arrest of a couple at the Crystal Falls Mini Mart for alleged drug dealing, a probation search of their home revealed more drugs in areas easily accessible to two children.

The home of 29-year-old Russell Lee Jr. and 39-year-old Erin Debello at American River Drive in Sonora was searched by the Probation-Deputy High Risk Supervision Team. Lee had an outstanding warrant for violating his supervision terms and the two were recently released pending they appear in court related to charges of possessing narcotics for sale as reported earlier here.

Child Welfare Services was contacted and took the two children living at the home to a safe place until other arrangements can be made with family.