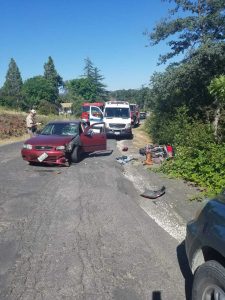 CHP Motorcycle versus car on Chiken Ranch Road in Jamestown

Update at 6 a.m.: The CHP has released new details regarding a head-on crash Thursday afternoon in Jamestown where a Sonora man was air-lifted from the scene suffering serious injuries.

As reported Friday (below), the CHP identified the two individuals involved in the wreck as 56-year-old Richard Tomlin of Sonora and 28-year-old Alexandria Bigger from Big Oak Flat, but no information as to how their vehicles collided was disclosed, until now. Tomlin was riding his 1984 Yamaha FJ1100 southbound on Chicken Ranch Road north of Nelson Road at 25 mph. He was forced to slam on his brakes when suddenly, a 2002 Nissan Sentra pulled into his lane while attempting to pass another vehicle on a blind curve at about 15 mph, according to the CHP. The vehicles hit head-on and Tomlin was ejected from the bike. He flew into the car’s windshield and he landed on the shoulder of the roadway.

Subsequently, Tomlin was flown to Doctor’s Medical Center in Modesto for major injuries. Bigger was not hurt in the crash. The CHP reports neither drugs nor alcohol are suspect to have played a role in the collision.

Original post Friday 5:15 p.m.: Jamestown, CA – A Sonora man was seriously injured in a motorcycle versus vehicle crash in Jamestown during the Thursday evening commute that slowed traffic.

The collision happened on Chicken Ranch Road just north of Nelson Road off Highway 108 around 4 p.m., as reported here. The details surrounding the wreck remain unclear, but the CHP has released the names of those involved. The Yamaha motorcycle rider was 56-year-old Richard Tomlin, who sustained major injuries and was taken by ambulance from the scene. The driver of a Nissan Sentra was 28-year-old Alexandria Bigger from Big Oak Flat. The crash remains under investigation.