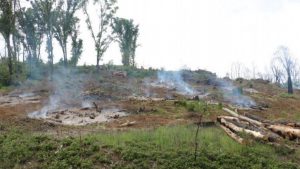 San Andreas, CA — During the past week, CAL Fire reports property owners have been hit with criminal citations for allowing their debris burns to spark fires.

Firefighters from the Tuolumne-Calaveras Unit of CAL Fire have responded to five illegal debris burns, resulting in four tickets. The escaped debris burns were on Sun Road in Mountain Ranch, Cheyenne Road in Copperopolis, South Burson Road in Valley Springs, Blue Mountain Road in Wilseyville and Joshua Way in Sonora. The citations issued were for oversized burn piles, lack of clearance around a pile, no one attending the fire and not having a permit to burn.

CAL Fire Law Enforcement Battalion Chief Mathew Gilbert stresses, “Actually all of these fires could have been prevented if the property owner would have followed the terms and conditions of the permit. Specifically, having ten feet of clearance around the pile down to bare mineral soil and maintaining a responsible person in attendance in order to keep an eye on the fire.”

Three of the fires’ flames spread to nearby vegetation resulting in a half acre grass fire, a 10 ft. by 20 ft. size spot fire and another almost burned the homeowner’s vehicle.

Gilbert wants to remind the public of the CAL Fire debris burn rules and provided this listed, which is written on the permit:

Gilbert adds that strong winds this weekend could impact those burning.