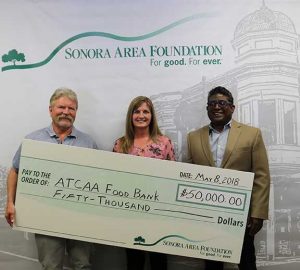 They say the monies were approved in response to a no longer available federally-funded Community Services Block Grant. The long-time funding source was key to helping cover operational costs, including staffing, which has been cut to three full and one part-time personnel. Food Bank officials note that they continue to rely on hands-on help from about 400 volunteers along with corporate and individual donations to various campaigns.

ATCAA reports that last year, Food Bank services helped feed over 5,500 people in need along with receiving, processing and storing food that was distributed across Tuolumne County through 16 partner pantries. Last year the ATCAA Food Bank distributed one million pounds of food.

According to Food Bank Director Deni Avery, “Our clients rely on the Food Bank. Many of them are on fixed incomes who would otherwise need to choose between food and other necessities such as medicine or electricity.” Many others she adds are working families who are unable to stretch their dollars far enough to provide adequate nutritional meals.

She quotes a recent study conducted by the California Food Policy Advocates, which determined that in Tuolumne County alone, nearly 8,000 people — approximately 15 percent of the population — is considered “food insecure,” meaning lacking reliable access to a sufficient quantity of affordable, nutritious food. One in five local children also fall into this category.

Nutritional Needs On The Rise

According to ATCAA Executive Director Raj Rambob, the loss of its Food Bank would be a devastating blow to locals without sufficient food supplies, especially since the agency is seeing an increase in need. Far from helpless people needing a handout, Rambob describes most of the people being served as those who work at least one if not multiple jobs.

“Until we begin to tackle the intersecting crises of the high cost of housing coupled with the lack of available housing, low wages, and underemployment, the numbers of those in need will continue to rise,” he states. He adds, “There is much to do and we can do it but people need to be fed until things get better.”

In the meantime, Rambob calls the Food Bank staff “heroes” for keeping things going without cutting back on services and says he remains optimistic as the agency focuses on lining up new funding channels and other means such as special events. For more details on ATCAA Food Bank’s work and ways to help, click here.