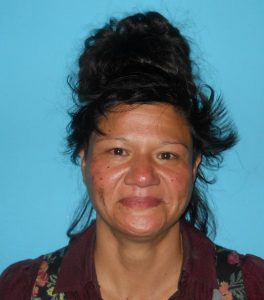 Sonora, CA —  The Sonora Police Department arrested a woman who allegedly threatened employees at a downtown bank, and then later attacked an officer.

Sonora Police Department Spokesperson, Sgt. Glen Roberts, reports the threats were made at the Bank of America on Friday afternoon at 4:42pm. 41-year-old Corrine L. Benavidez of Ceres was later located by officers outside the Sonora Opera Hall. She allegedly became aggressive toward an officer and clenched her fist. She was forced to the ground and continued to fight with officers until they were able to subdue her. One of the officers was kicked several times, but not injured. After being taken to Tuolumne County Jail, methamphetamine was found in her possession.

Benavidez was booked on charges of battery on a peace officer, resisting arrest and bringing contraband into the jail. No charges are being sought at this time regarding Benavidez’s actions in the bank.