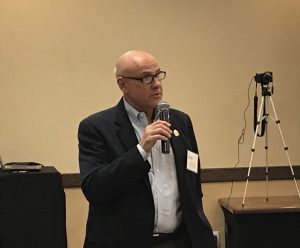 During the morning session, Catrina spoke about the state of housing in California. He noted that it can cost between $125,000 to $200,000 in places like the Bay Area to simply acquire all the fees and permits needed to begin construction on a dwelling. He stated that the California legislature currently feels rent control is the solution, but he argued that more supply is the real need. He also noted there has been little to no movement recently on efforts to reform the California Environmental Quality Act (CEQA). He stated that CEQA “doesn’t need to be blown up, but modernized.”

Supervisor Hanvelt encouraged those in attendance to get involved and let their voice be heard on the issue.

It was also noted locally that during the first quarter of 2018 the average sales price for homes in Tuolumne County was $344,000, compared to $319,000 during the same period a year ago. It is much higher in other areas of the state, as the median price for California is $544,000.

Speaking about the event as a whole, Cope stated afterwards, “What we’re hoping is that some of the individuals that were there heard about things like financing mechanisms or zero net energy opportunities that that they had not known about. We’re hoping that they can apply those for their projects, and we can have more housing for our residents.

The event ran from 11am-2pm.  On hand were numerous locally elected officials, business leaders and realtors.