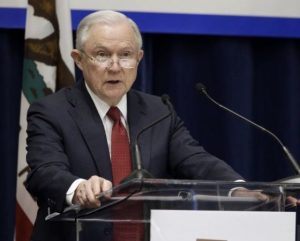 He has filed a federal lawsuit challenging three specific laws aimed at thwarting a federal crackdown on immigrants in the country illegally. Sessions spoke to the California Peace Officers Association in Sacramento today shortly after he filed the lawsuit. He stated, “We are going to fight these irrational, unfair, un-Constitutional polices that have been imposed on you (law enforcement), and your officers, and our federal officers. We are fighting to make your job safe and help you reduce crime.”

He also took a jab at Oakland Mayor Libby Schaaf, who alerted the public last month that immigration officials were planning to make arrests in the Bay Area the following day. Sessions said, “Here’s my message to Mayor Schaff. How dare you. How dare you needlessly endanger the lives of our law enforcement officers to promote a radical open borders agenda.”

Shortly after today’s speech, Governor Jerry Brown held a joint press conference with state attorney general Xavier Becerra criticizing the federal lawsuit. He took issue with the claim that the new rules make the jobs of law enforcement officials more dangerous. Brown argued, “This is a political stunt. It is not about the truth or protecting our state. It is about dividing America.”

While unlikely, Brown went on to indicate that he’s willing to work with Sessions to look at the issues and find possible solutions that are agreeable on both sides. He stated, “Despite what he’s done (lawsuit), I still put my hand out and say, ‘I’ll cooperate Jeff if you can get off this current maneuver you’re on,’ because it is unbecoming of you and you’re basing things on non-truth.”

It was noted at the press conference that it is expected to be a lengthy legal battle that could eventually go to the US Supreme Court.