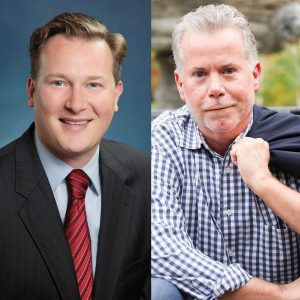 Sonora, CA — Pun intended, perhaps it can be called a terming out party.

With next Monday set as the beginning of the official declaration of candidacy filing period, a Republican Fresno County supervisor has officially thrown his hat into the ring for the California 8th District State Senate with the blessing of outgoing Senator Tom Berryhill, who is departing per term limits. Berryhill, who considered running for the State Board of Equalization has instead set his sights on the Stanislaus County Board of Supervisors.

Andreas Borgeas, reportedly has locally-raised campaign funds of $575,000 to date and is already beginning to rack up support from numerous county lawmakers, public officials and other community leaders throughout the eleven-county jurisdiction. The district, which includes all or part of Amador, Calaveras, Fresno, Inyo, Madera, Mariposa, Mono, Sacramento, Stanislaus, Tulare and Tuolumne counties, has more than half its estimated votes coming from Fresno County.

Borgeas states he is running to address what he describes as overwhelming taxes, unaffordable education, job-killing regulations, and declining standards of living. An educator with over a decade of classroom experience, he says he supports K-12 education reforms, increased vocational training and promoting greater local academic control. He will also fight to make California safer by reinstating the DNA collection of convicts to help law enforcement solve more crimes. Borgeas is married and has two young sons. A graduate of Georgetown Law School and Fulbright Scholar, he is also a professor of international security law at the San Joaquin College of Law.

Back in January, as reported here, local Democrat Tom Pratt, a Murphys resident, declared his intentions to run for the office. At the California Democratic Party pre-endorsement conference Jan. 28, Pratt reported that his campaign earned 93 percent of the votes, which would automatically add his name for consideration to those on the consent calendar, subject to ratification at the party’s convention in San Diego later this month.

The president of locally based insurers Fine Art & Collectibles Enterprises (FACE), Pratt is an active member and former chair of the Calaveras County Democratic Central Committee and has served on the Vallecito Union School Board since 2014. He is married with two young sons. A California State University, Northridge (CSUN) graduate with a degree in Theatre Arts, Pratt studied Art History at Santa Monica College, UCLA and in Paris. At CSUN he served on the Dean’s Council for the School of Arts as well as Social & Public Art Resource Center (SPARC).

Pratt says he is running to make sure rural California has a true voice in the capitol; to increase access to healthcare and funding for rural hospitals; to expand broadband availability; also to increase job training programs and apprenticeships. Among his stated goals are to fight for excellent education, great jobs, clean and reliable water.

While Railroad Flat resident Mark Belden has locally pulled papers for the 2018 8th District Senate seat race, he also did so for that of the State Assembly 5th District held by incumbent Frank Bigelow and has yet to declare any candidacy.

Beginning next Monday, candidates seeking to get their names onto the June 5 ballot must file their paperwork formally declaring their intentions. This paperwork, which includes candidate statements and sufficient valid nomination signatures, must be filed by 5 p.m., Friday, March 9.