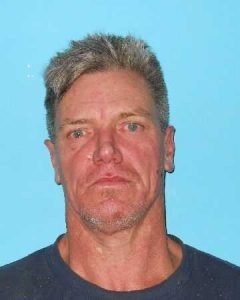 Sonora, CA — A man previously described as a friend allegedly struck, threw, kicked and assaulted a 65-year-old Columbia woman in her home over the weekend.

Tuolumne County sheriff’s officials say that deputies were called to a home on Marble Quarry Road in the early hours Saturday and found the resident had been victimized by 49-year-old Robbie Davis of Santa Cruz. It is alleged that he struck her in the arm and threw her to the ground before kicking the victim, also causing a laceration on her head using a metal object.

According to the sheriff’s report, before fleeing the scene Davis ripped a garage cabinet off the wall and took sets of keys belonging to both her vehicles. He was arrested by deputies when he later returned. Booked into the Tuolumne County Jail on charges of assault with a deadly weapon causing bodily injury, cruelty to and theft from an elder, vandalism and petty theft, he was assigned a $50,000 bail.