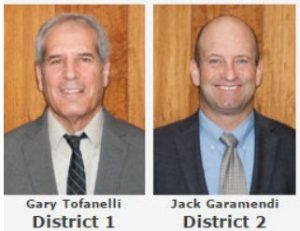 San Andreas, CA – The Calaveras County Board of Supervisors none too gracefully voted in its new leadership, a clear indication that internal struggles are continuing into 2018.

This morning, while attending to the first order of business for the new year — namely the selection of a new board chair and vice chair – District 5 Supervisor Clyde Clapp, a staunch pro-cannabis ban advocate, immediately broke with the somewhat established pattern of elevating the current second-in-command to the helm. That would have been District 2 Supervisor Jack Garamendi, the strongest pro-cannabis regulation lawmaker on the board whose jurisdiction is home to far and away the county’s largest number of registered commercial grows.

Out of the box, Clapp nominated District 1 Supervisor Gary Tofanelli, whose former pro-ban stance has moved more towards potentially supporting a very strict regulatory permanent ordinance, which contains several stipulations that he personally mandated. Clapp’s pro-ban cohort District 2 Supervisor Dennis Mills immediately seconded and the motion passed 3-2 with Tofanelli casting a vote in his own support.

Current Board Chair and District 3 Supervisor Michael Oliveira, who had been signaling his preference that Garamendi get his turn to lead, subsequently moved that Garamendi remain as Vice Chair, which ultimately passed 4-1 with Clapp casting the only opposing vote. The deliberations and vote came down amidst a good deal of public comments and discussion over the fact that Garamendi and his district were essentially passed over due to divisive politics.

During the board’s lunch break, Oliveira acknowledged in an interview with Clarke Broadcasting, “I have enjoyed being the board chair for the past year…and I want to personally thank everybody who acknowledged my ability to do what I did to keep this board heading in the right direction.”  He added that he is looking forward to campaigning hard this year for the purposes of retaining his seat. At this point he faces at least two contenders: former District 3 Supervisor Merita Callaway, who he defeated in 2014, and Terrence (Ed) Langan.

After today’s full day of business the supervisors are scheduled to reconvene tomorrow with the specific mission of trying to come to at least a 3-2 vote on new rules that will replace the county’s current urgency regulatory cannabis ordinance, otherwise set to expire Feb. 14. At this point the board is equally considering a set of much tougher requirements or an outright ban.  Since such a decision requires 30 days to enact, the board has precious little deliberating time — in fact, just the balance of this week — left.