Hwy 120 Bridge Delays Due To Striping 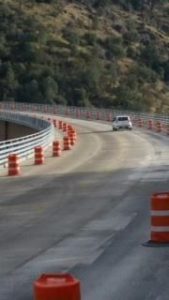 According to Caltrans District 10 spokesperson Warren Alford, crews will be on-scene until about 5 p.m. working to complete the line painting as well as attending to some shoulder work that is also part of their final punch list of chores. He says that motorists should anticipate delays of up to ten minutes while the cone zone is in place.

As reported here, the span’s two lanes fully reopened last Friday after more than a year of extensive multi-million dollar renovations that brought several months of overnight closures and placed automated 24/7 traffic controls on both ends of the span that required travelers to plan for ten-minute traffic waits.

Alford says it is not certain yet as to whether crews will be doing any more work on the span this week. No other cone zones were planned by Caltrans this week along any other Mother Lode highways.