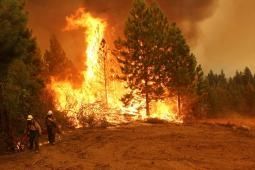 Sonora, CA — The findings of a scientific study reviewing the 2013 Rim Fire, conducted by a team from Penn State University, highlight the benefits of controlled burning.

The Rim Fire ignited in August of 2013 in Tuolumne County and burned 257,314 acres. It is the third largest wildfire in the state’s recorded history. (More details about the fire can be found here)

The scientists conducting the post-fire study found the impacts from the Rim Fire were much less severe in areas that had recently been treated with controlled burns. A synopsis compiled about the report notes that they specifically looked at 21 previous fires within the Rim Fire’s footprint and found that areas that had burned within the preceding 15 years fared much better.

Allen Taylor, professor of geography and associate in the Earth and Environmental Systems Institute at Penn State, says, “It points to the potential use of prescribed fires to reduce severe fire effects across landscapes.”

The study also shines a negative light on the impact of the larger mega fires, as opposed to smaller controlled burns. Larger fires will much more likely change the composition of the forest. Shrubs, which grow quickly after a fire, can take over forestland, and then burn again before new trees are able to re-establish. While controlled burns primarily just remove the surface fuels.

Lucas Harris, a graduate student in geography, and lead author of the report, adds, “If you have a high severity initial fire, that’s a real lost opportunity. You are probably getting a vegetation change due to that first fire that’s going to cause more high-severity fires in the future and potentially the emergence of non-forest that could last for a long time.”

The Penn State study was funded by a NASA Pennsylvania Space Grant Consortium Fellowship and a Chelius Graduate Fellowship.