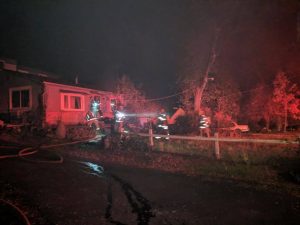 The call came in around 10:30 p.m. to police dispatch with the person indicating that residents were still inside the home on Truckenmiller Road off of Mono Way. When officers arrived on the scene, smoke was coming out of the structure, but they quickly learned that all the residents had escaped the flames and made it out of the house safely. Firefighters were able to put out the fire without the flames spreading to any nearby vegetation.

Crews remained on scene for several hours mopping up. No damage estimate has been given and the cause of the fire is under investigation.