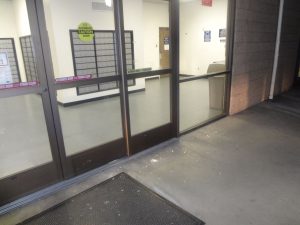 Sonora, CA — The Sonora Police Department responded to the main post office on S. Washington Street last night because a man was suspiciously outside “screaming and not wearing any shoes.”

The PD located 27-year-old Evan Dale Underwood sitting on the sidewalk in front of the building. After further investigation, it was determined that Underwood had thrown a glass bottle at the building in an attempt to break a window. Underwood is on probation and one of the terms is that he obeys all laws. He was booked into Tuolumne County Jail, without bail, for attempted vandalism and violation of probation.

The incident happened at around 7pm.